We won CSULB No Regrets' first year tournament, BRO Life (Best Regret Of your Life) a long time ago, but I’ve been lazy with this blog and not posted about it. We mainly played in this tournament to support Igloo and Long Beach State in their effort to get it going, but ended up having an amazing time and coming away as champs. Our plan was to send an all-returner team, and thought we talked UCLA into doing the same thing, but UCLA dropped out of the tournament a few days prior to it. We came in as the top seed, and unlike the round robin format of the UCLA One Day Tournament allowed us to, we could play to win this tournament. First things came first though. 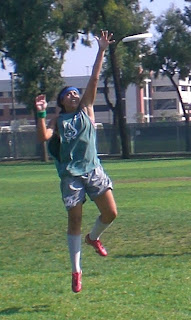 We decided to get all bro'd out. This meant sporting muscle tees, headbands, bro hats, and most importantly, a bro attitude. No one on our team took warming up too seriously, so we strolled up with Robit blasting the Space Jam theme song a half hour before the first round game against SDSU, cleated up, took a quick lap, and huddled up. In the first couple points, it was clear which team warmed up for an hour and which team brought four discs. They went up 3-1 and then we realized this tournament wouldn’t be a walk in the park and we would actually have to play hard to win. We buckled down and started playing our own game. It didn’t take long for us to catch up and pull ahead. Somewhere in between our mini comeback and winning the game, a girl on SDSU bid for a disc intended for me and instead hit me around the knees and flipped me over. I held on to the disc but landed hard on my head and can't remember much of the end of this game or the next. We played Cal Poly Pomona and won, probably by a lot. They're a first year team led by two third year girls that used to play with the men's team. Our third game was against Long Beach. We always have fun playing them and this was no exception. They gave their rookies a lot of playing time, so the number of times Igloo broke me inside was minimized. Cuervo was a D machine in this game. She just wouldn't let up. I’d never really played with her before, so I didn’t expect this and she blew me away. My play of the game was a face plant from tripping on my girl's cleats. I think

Igloo thought about that and laughed at me every time she saw me for the next two days. I’m not sure what the final score was, but we won handily. Our last game matched us up against the second seed, Cal Poly SLO. They came out pumped up when we weren't and went up by a lot in the beginning. Then they took half 7-2 or 7-3. Our end wasn't pretty and they were playing well. I don't know any of their names, but they had one player that was making great decisions with the disc and seemed like seasoned. However many rookies they had out there weren't getting in the way or disrupting their flow. We mustered up a little bit of a comeback, probably because they were low on subs as well, but it wasn't enough and we lost 8-12 on hard cap.

On Sunday, we were down three players (Tidal, Ritz, and Mahi) but were up two (Penny and Kacto) with fresh legs. In our first game against Redlands, our play looked clean again. We quickly won 13-3 and had plenty of time to watch the Cal Poly SLO - SDSU game unfold. SDSU was down by

two and pulled it back to a tie, but then lost by two. Cal Poly SLO would be the first seed, we were second, SDSU was third, and Long Beach was third (they had the same record, but SDSU won the head-to-head matchup). If SDSU had won that game, it would have been a three way tie for first and would have come down to point differentials, which would have either gone our way, putting us in first and matching us up against Long Beach in the semis, or come out the same as it did. We played better in our semis game than we did in our first game against State. Loryn threw scores over and over again and was so good that I’m fairly certain they called timeouts entirely to talk about how they could minimize her damage. We won 13-7 and moved onto the finals. I've made it to quarters at Pres Day, semis in DUDE, and the C-Bracket finals at Lei Out, but I've never actually won an ultimate tournament, so I was ready to tear it up. It was a fun game, mostly because I love winning. We jumped out to a 4-0 lead before they scored, but I didn't feel comfortable until we took half 7-1. It was a really tiring game since most of us had to play nearly every point, but we pushed through and it was completely worth it. Since Loryn threatened to put it deep every time, they desperately tried to prevent that and it was easy to get open on an in cut. We'd easily get two or three passes up the open side and then dump it back to Loryn and have her throw the score. A couple times more than we would have liked, we turned it in the red zone, but usually would get the disc back with good field position and were able to score on our next possession. The final score was 10-1. Overcoming the loss from Saturday made the win that much sweeter, but a tournament victory on any terms is fine by me. 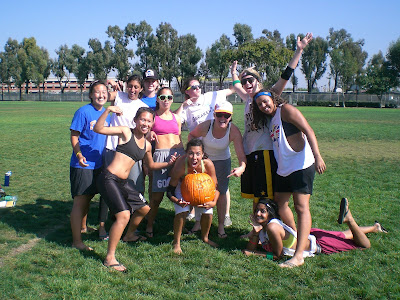