Our first tournament of the season was the UCLA One Day Tournament and we were split up into X and Y. I don't know which I was on, but I wish we called ourselves either Xoryn or Yoryn instead of letting Tambler name us after how much fun we had on Saturday night. We played 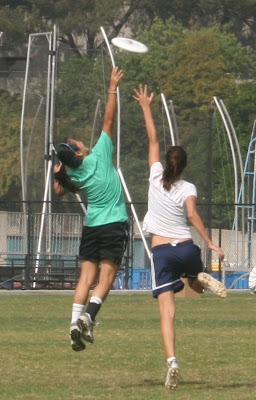 Hawkins and Jolie's UCLA team first and went down a couple points in the beginning. I wasn't paying too much attention to the score all day, but before one point, Tambler came to the line to get us pumped up by saying she'd take off her shirt if one of us got a lay out D. While I was running for a disc that Chiral tipped on the mark, I was considering slowing down, laying out, and smacking it down, but I decided it would be too much of an asshole move, so I just caught it and then realized I was in their end zone. Callahan! We pulled our way back into it and won by a couple points. Our rookies had their first game under their belts and we moved on to our next game against CSULB, my favorite team that isn't us. It's a good thing I like them so much because I'm pretty sure during that game Tambler told me I'm cut and that I should see if they'll take me. It was a fun game and may have crossed the line into too silly, but it was mostly Igloo's fault and I support that in these preseason tournaments. Igloo got two successive foot blocks on one point and ended the point by grabbing a Callahan because she loves to steal my thunder. At least two of our rookies legitimately bid on a discs. Neither of them caught them, but it's so great to see that they're already not afraid of hitting the ground. When someone else was taking Igloo or she wasn't on the field, I didn't pay much attention to our matchups and kept matching up against their really short players. I still haven't heard the end of that. We took the lead of that game in the beginning and won by a decent margin. Before our third game, Tambler and Meeko switched coaching positions and we lost a couple players to the other Psycho team that had suffered a few minor injuries. Out third game was against another UCLA team that I thought was a lot better th 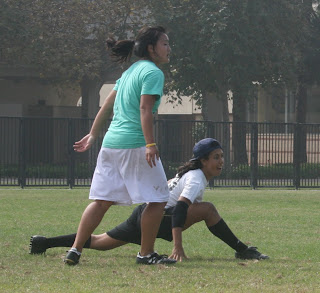 at the first. In the past, UCLA has been in better shape than we have later in the day, and that may have contributed to this, but I think there was a lot more to it. The big players on their team were Beans, Sapphire, Slavia, and maybe one or two others I forgot about. They had good flow for a first tournament and forced us to make D's instead of having a ton of drops like other teams. UCLA was playing better than we were, but we stepped up our game to play on their level, so I think we were playing better than we had been in the morning. Both teams still had a lot of turnovers, but not as many as our first two games. On one point, Loryn had five D's in the same spot of the endzone. It was insane. We were low on numbers and tired and it showed. UCLA beat us by about four points. Irvine was up next. We're used to them being a lot of fun, but they had a lot of new faces we didn't recognize. Still, they lived up to our expectations. Mel, one of our rookies, showed that she is better in most ways than the old Mel when she got a monster D in this game. She also laid out for a bad throw from me and looked pretty awesome all day. Don't tell her I think she's good though. We won that game by about six, so we went 3-1 on the day. The other Psycho team (was it Xonds or Yonds?) also went 3-1 as they beat Caltech, Irvine, and the third UCLA team, but lost to the UCLA team we beat. When I was a rookie, I didn't go to any preseason tournaments, but after this one, I think starting the year off with a one day tournament is an ideal transition into the season and a great way to give the rookies a taste of what it'll be like to be a college ultimate player.

Thanks to Igloo for the pictures.
Posted by Jane at 10:07 PM