Can anyone tell me why this is a called a championship tournament? Would Pres Day be more legitimate sounding if I changed the name to "Presidents' Day Championships"? It was a fun semi-spontaneous road trip up to Santa Cruz with Monstro, Dada, and Nagana. What was originally thought up to be a camping trip turned into a weekend of sleeping in a castle of a house and being ultimate superfans. 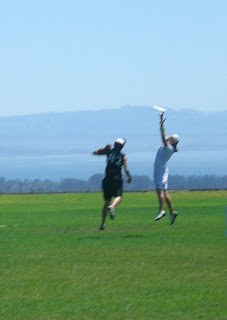 Watching high level ultimate was great, but a couple big names I hoped to see were either missing or inactive and I've still never seen Fury play Riot because Riot lost in the semifinals. Usually I cheer for the underdog, but a Fury-Riot match up could have been so epic, especially since this is a championship tournament and all. The wind picked up by the time the semifinals rolled around and gave Riot more trouble than Traffic, contributing to their loss. Fury then beat Traffic in a mundane finals game even without Georgia Bosscher and Alicia White. Underground had stronger results than I expected and it looks like Rare Air had a tough tournament, going 1-4 in pool play, but other than that, the games went mostly as expected on the women's side.

There were a couple of upsets in the Open Division, but I missed most of that action. Since Revolver took second in their pool, the Sockeye-Revolver semifinal was the big game of the tournament. I didn't watch it because I was standing on the sideline between the two women's semi's, but the perimeter of that field was packed and I hear there were spectacular plays on top of spectacular plays. Sockeye won that game and the finals game against Doublewide.

Without a doubt, Streetgang was the sharpest looking team out there, especially with those new hats. However, they didn't have as much success as I thought they would. They have a ridiculous pool of talent but a tournament like this gave me some perspective on all the elements a team needs to succeed against top teams. In some games against strong teams, they had solid first halves but then would have a couple miscommunications and slide out of the lead. Their chemistry wasn't always strong, but I anticipate that down the line they'll be rocking some of the teams that beat them in Santa Cruz. As a newly formed 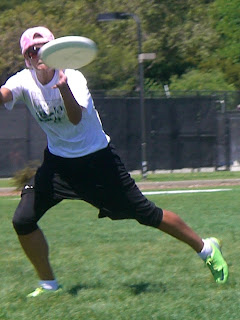 team, they're only going to get better as they play more with each other.

Safari took seventh and held seed. They came close to taking down Zeitgeist in their first game on Saturday morning, but lost in hard cap. Freshly back from Africa, Brenda had some good D's in that game and set a killer mark the rest of the weekend. Tai had at least a couple impressive layouts dispite a dislocated rib in her back that she could feel move around when she hit the ground. They beat Box, the only Southwest team they played, and took out a Chelsea Putnam-less Schwa in the 7th place game.
Posted by Jane at 12:40 AM